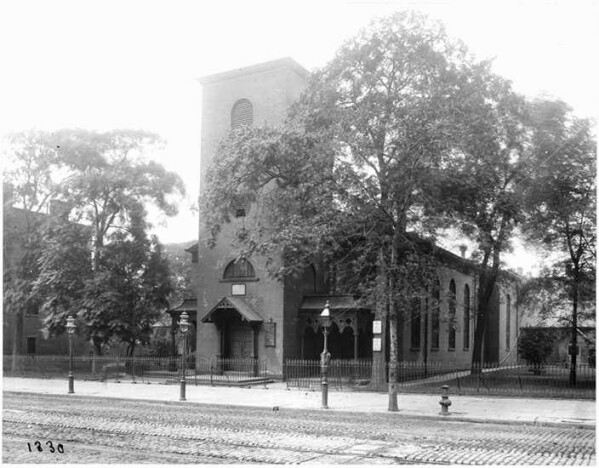 On October 22, 1820 a small group of residents of the riverfront village of Greenwich gathered at the home of Catherine Ritter to organize an Episcopal church for their growing community. They named the church after St. Luke, the physician evangelist, in recognition of the village's role as a refuge from the yellow fever epidemics that plagued New York City during the summers.

One of the founding wardens was Clement Clarke Moore, a gentleman scholar of biblical Hebrew and Greek. He also penned, "Twas the Night Before Christmas." The first Church of Saint Luke in the Fields Eucharist was celebrated in a prison watch house on the corner of Christopher and Hudson Street on Christmas of that year.

In 1821 the cornerstone of the church was laid on a site on Hudson Street donated by Trinity Church. The new church was consecrated on Ascension Day, May 16, 1822. In 1845, St. Luke's became a leading proponent of Anglo-Catholic worship in the United States, offering daily services of the Divine Office, as well as weekly Sunday Eucharists. One of the first professions of monastic vows in the Anglican Communion since the Reformation occurred at St. Luke's in 1847.

In 1891, St. Luke's became a chapel of Trinity Church. In the following years, the block was expanded to serve the increasing number of neighborhood ministries, including extensive outreach to neighborhood children. In 1927, a new gymnasium was added to the block. In 1956, deteriorating houses surrounding the chapel were razed, and a school building, playground and garden were constructed.

In 1976, Trinity Parish decided to divest itself of all but one of its chapels, and St. Luke's once again became an independent parish of the Episcopal Church. In 1979, St. Luke's was among the first churches in the Anglican Communion to appoint a woman as an assistant priest. On March 6, 1981 a fire destroyed much of the church, the second such fire since the church's founding. In 1985, after four years of fundraising and rebuilding, St. Luke's was reconsecrated.

Since the 1980s, St. Luke's has been deeply affected by the HIV/AIDS pandemic. The AIDS Project of St. Luke's has served Saturday dinner and weekend teas to over 35,000 persons with AIDS since its founding in 1987. During the last decade, St. Luke's has opened its doors to the Greenwich Village community with a festive Gay Pride evensong celebration, and in recent years it has participated with a sizeable parish contingent in the annual New York City lesbian and gay pride parade. 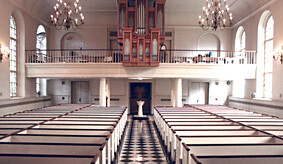 In 1994, the Rev. Dr. Roger A. Ferlo became rector of the church. St. Luke's saw a great expansion in membership and in its ministries. With attention to St. Luke’s School, St. Luke’s also established the Go St. Luke’s tutoring program for children in public and parochial schools.

In 2001, St. Luke’s began an outreach program for lesbian, gay, bisexual, transgender, questioning, and allied youth from the streets. The program has grown tremendously and now welcomes approximately 80 young people on Saturday evenings, an average of 30% whom are homeless.

As World War II ended and young middle-class families moved into the West Village, St. Luke's responded to the community's need for a school. With the help of Trinity Church, St. Luke's School opened its doors on September 24th, 1945, with 19 children and two teachers in classrooms in the Parish House. The School operated as a division of the church until it achieved its independence in 2012.

Our current rector, the Rev. Caroline Stacey, joined us in May 2005.

Learn about our organ.