The Choir of Saint Luke in The Fields

The Choir of St. Luke in the Fields is a professional ensemble made up of some of New York City's finest singers. In addition to singing at St. Luke’s, members of the choir have performed and recorded with ensembles such as New York’s Ensemble for Early Music, Pomerium, BachWorks, Artek, Concert Royal, Western Wind, the American Bach Soloists, Anonymous Four, My Lord Chamberlain’s Consort, the Clarion Music Society, Trefoil, the Orlando Consort and the Metropolitan Opera Chorus. 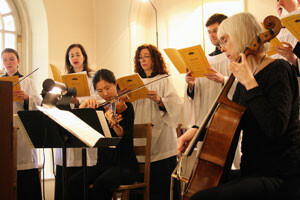 As part of the liturgy at St. Luke’s Church, the Choir regularly performs masses and motets that date from the fifteenth century to the present. The Choir has presented a number of premieres, including the New York premiere of Arvo Pärt's Berliner Messe and Missa Sillabica as well as Dan Locklair’s Brief Mass. The choir is featured in an annual concert series. The North American premiere of Georg Phillip Telemann’s St. Matthew Passion of 1746 was part of the 2003 Concert Series, and in 2011 the Choir presented the critically acclaimed NY premiere of C.P. E. Bach’s St. Matthew Passion of 1769.

The Choir is also featured on a recording of Christmas music, A Ceremony of Carols: Christmas at the Church of Saint Luke in the Fields, and on a CRI disc The Music of Frank Wigglesworth, which includes choral works by the Greenwich Village composer written for St. Luke’s. The Choir's 2018 recording of Giovanni Pierluigi da Palestrina's Missa Tu es Petrus was recently featured in Classical Music Daily.

Excerpts from the 2009 Music at the Sistine Chapel concert were featured on an ABC news documentary, Secrets of the Sistine - Michelangelo's Mystery.

The Choristers of St. Luke’s 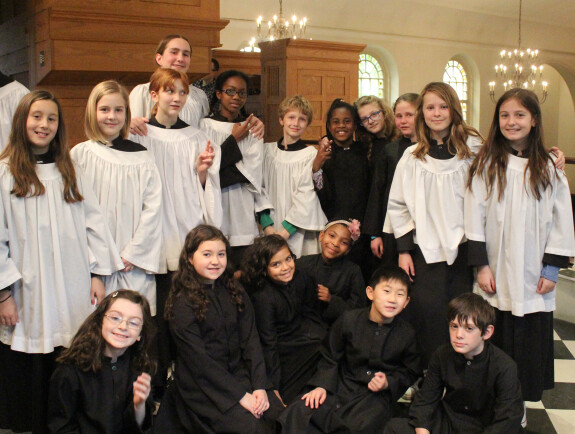 The St. Luke’s Choristers is a choir of boys and girls in grades 4 through 8. While many of the Choristers attend St. Luke’s School, the choir welcomes children of parishioners at St. Luke’s Church as well as from the wider community. Choristers learn the basics of musical notation and receive vocal training. There are frequent solo opportunities, which allow children to develop poise when performing in front of others. The Choristers have the opportunity to work with adult professional musicians in a professional setting.

Membership is open to any child who loves to sing and is willing to commit to the rehearsal and service schedule.

Auditions for children in the third grade and fourth grade are held in December. Children who are accepted into the Choristers have training rehearsals on Tuesday afternoons from 3:30 to 4:30 pm from January through May. They then join the Choristers in the fall as probationers, and become full members of the choir the following September.

Children in grades 5 through 8 are welcome to audition at any time, by appointment.

In addition to singing regularly at services at the church and the school, the Choristers participate in special events such as concerts and Evensong services at St. Luke’s Church and at other venues, and perform with the Choir of St. Luke in the Fields, a professional vocal ensemble, and on occasion with orchestra. They have the option to participate in an annual Chorister Festival at the Cathedral of St. John the Divine.

For questions or to schedule an audition, please contact David Shuler at the Music Office at St. Luke’s Church at 212-633-2167 or at

The St. Luke’s Summer Choir sings at summer 10:30 a.m. services beginning in June and continuing through the Labor Day weekend. Membership is open to all ages. A love of singing, the ability to sing on pitch and a willingness to learn are all that is required, though the ability to read music is a plus. The choir rehearses on Sunday mornings.

Thank you for considering a donation.